Why My Pants Don’t Fit Anymore…

I usually don’t write about food because quite honestly, it’s not important to me.  However, there are some foods here that I feel are worth noting.  First and foremost is the carne.  Argentina became a prosperous country (top 10 richest in the world) in the early 20th century because of their extensive cattle ranches.  (Side note, the Argentine version of Monopoly is called “Estancia”, which roughly translates to a ranch for the wealthy.)  So red meat, especially steak is big business.  Argentines eat on average 67 kilograms (just under 150 pounds) of carne a year.  That is pure craziness, but of course being a red-meat lover, I don’t have a problem with this indulgence.  I ordered a 400 gram steak (0.88 pounds!), and that was only a medium sized portion… 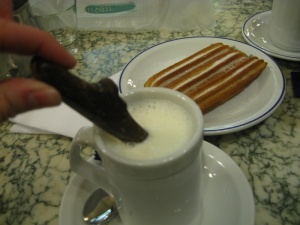 The second food worth describing is dulce de leche.  The best comparison I can make is with nutella, the addicting hazelnut spread popular around the world.  You can put it on French bread, other pastries, or another popular option apparently is just eating straight out of the container like ice cream.  Delicious!  Of course the only thing better than plain dulce de leche is stuffing it in churros.  For those unfamiliar, a churro is basically fried yumminess.

And my final “delicacy” (I obviously use that term very loosely in my eating habits) would be the “submarino”.  This drink is steamed milk served with a chocolate bar on the side.  The idea is that you put the chocolate in the milk and when it melts and creates the most delightful hot chocolate you’ve ever tasted.  This is course is made even more enjoyable when accompanied by churros.

(And no, my pants are not fitting very well these days.)

2 thoughts on “Why My Pants Don’t Fit Anymore…”