After being in New Zealand, Australia, Africa, and England for a total of more than four months, which all drive on the left side of the road, looking right before crossing the street finally became instinctual.  Enter Stockholm and right hand driving.  When we first entered New Zealand it was simple, I look one way and immediately remember that it’s wrong and look the other way.   I was now so lost on which side to look.  I had been trained my entire life to look one way, spent the previous four months the other way – I couldn’t tell which was which anymore.  A few honks later, I was back on track.

Using the pound in London, I thought we had already experienced the pinnacle of expensive exchange rates – how wrong we were.  Enter the Swedish krona.  Using the ever reliable Big Mac index, the Swedish near socialist government has accomplished an $12 Big Mac meal.  It is really depressing when you can’t even afford to eat at McDonalds.

Apparently our sense of style isn’t nearly developed enough for Stockholm night life.  Trying to meet up with a colleague of Matt’s at an outdoor bar, even our “best” clothes (we only get a choice of about 6 shirts, if they’re all clean) got rejected by the bouncer.  In our defense though, basically every local person wandering around Stockholm probably just came from a photo shoot for a J Crew catalogue. 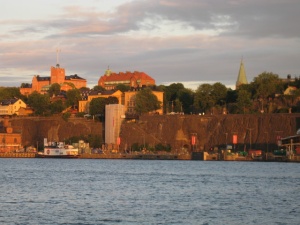 Other than the expense of the city, it was fabulous!  The landscape along the water was postcard perfect.  The pure number of daylight hours was also amazing.  Being so far north, the sun finally started to set around 10:30pm (this picture was taken around 11pm), even though it never got completely dark.  It was completely different than the camping schedule I was on before that; it got dark around 6pm and I was in bed around 8:30, 9:30 if it was a “late” night.